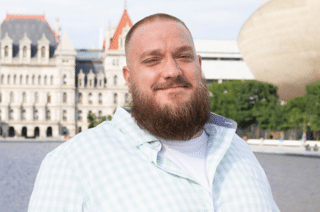 Steve Rybkin is a journeyman plumber/tankless water heater technician. He began his plumbing career 12 years ago after talking to some friends about the work. He has great customer service focus and if you are looking for experience, Steve is definitely a water heater expert. After growing up in NYC he moved to the area for work. Steve loves the history of the Capital Region and one of his favorite history places is the Stockade District in Schenectady.

What is your favorite restaurant and why?

The Charleton Tavern. It’s a beautiful, small and quiet tavern with great food and people.

What do you love most about working at Empire State Plumbing?

It’s a company that treats employees with respect and love.

What organizations are you passionate about?

Customer Reviews
About Me
View all Reviews
Testimonials
from customers I've helped!
Before and after photos from jobs I've worked on:
Back to Previous Page Back to Meet The Team